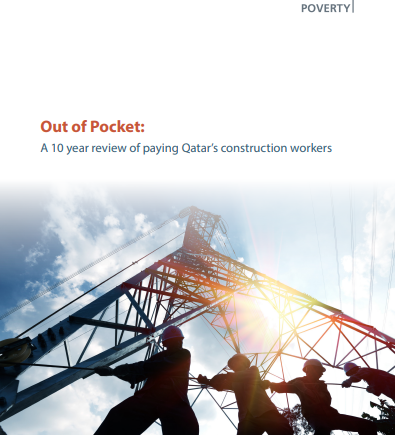 As the men’s world cup in Qatar begins, our new report, Out of pocket: a 10 year review of paying Qatar’s construction workers’ , reflects on what progress has been made to tackle the late and non-payment of construction migrant workers’ wages. Migrant workers move to Qatar attracted by the prospect of higher wages and yet late and non-payment of wages is one of the most pressing issues they face.

A reported 30,000 migrant workers were employed to build the stadiums alone. Obstacles, such as the Kafala system, and a pay when paid practice has impacted 12,000 migrant workers in the last six years often leading to the late or non-payment of wages.

Almost a decade ago, using our knowledge and expertise on labour issues in construction, Engineers Against Poverty embarked on a journey to understand the reasons for late and non-payment of wages and the impact on construction workers.

Some recommendations from our report in 2014 have been implemented, such as making it easier for workers to change employers and an electronic payment system. There have been significant attempts at progress through other methods such as new systems for complaints and implementing a minimum wage and wage guarantee fund but implementation has often been found wanting.

However, as a wealthy nation that should not have been in this position in the first place, the Qatari government has not gone far enough in preventing or resolving the abuse and mistreatment of migrant workers, and the problem of late and non-payments still exists on a large scale. In the space of 12 months, there were almost 25,000 complaints around non-paid wages, benefits and annual leave.

Whilst the spotlight is on Qatar during the men’s world cup, the focus on late and non-paid wages cannot end when the tournament does. In this paper, we provide two key recommendations to the Government of Qatar on reducing payment periods and placing liability on contractors and subcontractors that can help to ensure that more migrant workers are paid, in full and on time.