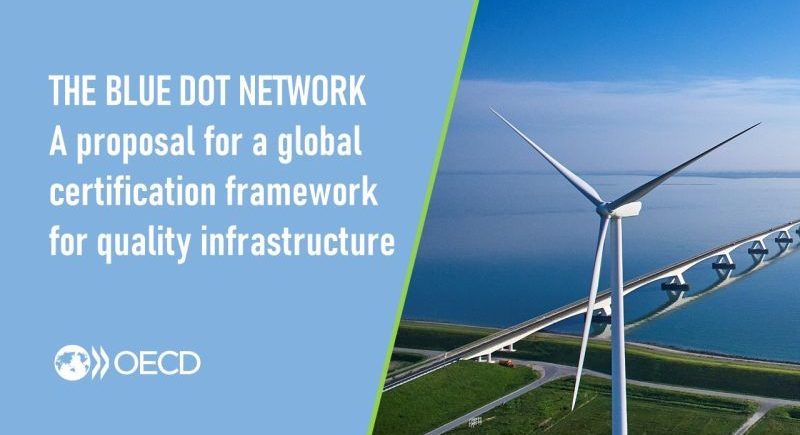 The OECD recently published a proposal for the Blue Dot Network. EAP Executive Director Petter Matthews is part of an ‘Executive Consultation Group’ convened by the OECD to ‘advise on the design and implementation’ of the initiative. Here he reflects on the progress made and identifies some challenging issues that require consideration.

The Blue Dot Network (BDN) is a global certification framework for infrastructure investments. Established by the governments of Australia, Japan and the US, with support from the OECD, the BDN will draw on a range of international goals and standards to assess and certify projects. Certification is intended to improve standards, attract private capital and help reduce the estimated USD 2.5 – 3.5 trillion infrastructure investment gap.

This gap has to be reduced if we are to tackle the climate emergency, recover from the pandemic and meet the Sustainable Development Goals (SDGs). We should welcome initiatives aimed at doing this, but not uncritically. That’s because poor investments and directing resources through ineffective mechanisms can be as bad or even worse than no investment. It’s important therefore that we critically evaluate the BDN, recognising its potential and identifying potential pitfalls so they can be addressed.

The BDN is widely perceived to be a response to China’s Belt and Road Initiative (BRI). Its backers refute the claim, but concerns persist that investment decisions could shaped by a geopolitical, rather than developmental priorities. This would be a missed opportunity of epic proportions. If the BRI and BDN were to align their efforts both would have a greater impact on meeting the world’s infrastructure needs.

The BRI has excelled in the rapid deployment of investment, its growth has been meteoric but it has been criticised for neglecting social and environmental issues. The BDN is committed to addressing these issues but its backers have struggled to deploy capital at the required rate and volume. These differences would appear to provide the basis for cooperation or at least a level of coordination.

The leading multilateral development banks (MDBs), including the World Bank, have signed cooperation agreements with the BRI. The BDN should adopt a similar approach and seek agreements with the BRI and other initiatives to cooperate on directing finance to where it is most needed, on maintaining capital markets and exploiting synergies.

The BDN is described as a multistakeholder initiative (MSI) and the OECD has established an Executive Consultation Group to provide input to its design. The decision-making however rests with a steering group comprising the governments of Australia, Japan and the US. In its current guise therefore, the BDN is more accurately described as a government initiative with multistakeholder consultation.

MSIs bring representatives of the private sector and civil society into all stages of decision making. It’s not that governments surrender their authority to decide, they after all have a democratic mandate, rather it’s that they commit to genuine dialogue and to considering the views of stakeholders in all stages.

A USAID review of MSIs found that ‘full civil society participation’ is a ‘key to success’. The BDN should be bolder than it is currently and put multistakeholder dialogue at the core of the initiative. Doing so would enhance its legitimacy, improve decision-making and help ensure its success.

Concerns have been raised about reliance on private sector finance, particularly with regard to low-income countries where private finance currently represents a small proportion of overall investment. For example, the Infrastructure Consortium for Africa reported that in 2018 the private sector invested USD 11.8bn in African infrastructure just 12% of overall investment. Even if the BDN were to double this figure in the next 5 years, its impact on meeting what is estimated to be an annual shortfall of investment in Africa of USD 100 billion would be marginal.

Even if the increase in private sector investment is modest it is worth pursuing, but not at the expense of increasing the volume and improving the efficiency of public investments which are usually more significant. African governments for example invested USD 37.5 billion in Africa in 2018, three times that of the private sector. Reducing losses through inefficiency, estimated to be up to 50 percent in low-income countries, requires significant improvements in governance.

The BDN to its credit recognises the need to strengthen the public sector. It proposes the provision of ‘capacity building tools and programmes, along with access to a community of practice’ to support that process. This is a positive feature and the goal of this support should be to strengthen public sector capacity to deliver quality infrastructure, rather than narrowly to obtain BDN certification.

It remains to be seen how the capacity building will be funded. The governments backing the BDN should commit their own resources, align them with the MDBs and seek contributions from the private sector investors who will benefit from the scheme.

Focus on emerging and developing economies

The BDN seeks to ‘facilitate increased infrastructure investment especially in emerging and developing economies’. No one would doubt the need for more and better-quality investment in those environments. The risk however is that it looks like high-income countries telling low and middle-income countries what is good for them whilst failing to adopt similar measures themselves. This approach can’t be justified on the basis that high-income countries don’t face similar challenges.

It is estimated for example that the US has an investment gap of $2.59 trillion in the period up until 2029. In Australia, the underperformance of infrastructure has been described as a serious societal problem and the former head of Infrastructure Australia has warned of the secrecy and lack of transparency surrounding megaprojects. Japan too faces serious challenges too as its aging infrastructure increasingly presents a major problem in social and economic terms.

The governments involved should encourage adoption of the BDN in their own domestic markets. This would demonstrate their confidence in the approach and could help to boost its uptake.

The BDN proposal sets out a draft certification process that is ‘efficient in terms of time and cost’. Efficiency is achieved in part by aligning with existing standards. For example, where projects have met the criteria of other schemes, such as the IFC Performance Standards, they will be considered to have automatically met the corresponding elements of BDN certification.

Efficiency is also achieved through the inclusion of an initial self-assessment, which is submitted online with supporting evidence, before being verified by an independent reviewer. This approach avoids being too burdensome on applicants, but will it be sufficiently rigorous?

For the certification to be meaningful it requires a level of detail and specificity. Most of the schemes that the BDN will seek to align with – e.g. G20 Principles for Quality Infrastructure Investment, the Sustainable Development Goals and the International Finance Corporation (IFC) Performance Standards – are high-level, not all are specific to infrastructure and they don’t necessarily lend themselves to objective assessment.

It is also important that stakeholders have an opportunity to be involved in the assessment process. It’s one thing for example for a project owner to report positively on labour standards and inclusion, but the views of workers and marginalised people are needed to verify that report. It shouldn’t be difficult to create opportunities for stakeholder engagement during BDN assessments and doing so would add credibility and legitimacy to the initiative.

There is an urgent need to increase the quantity and quality of infrastructure investment. There is value in increasing private finance, but it should not be pursued at the expense of strengthening public investment which is usually more significant, particularly in low and middle-income countries.

The financing landscape required to meet this need should be pluralistic so that borrowers have choice and understand the costs and risks of the various options. Competition between financiers can be a positive thing when it happens in the context of multilateral cooperation and agreement on prioritising global challenges.

The BDN has the potential to make an important contribution and the multistakeholder dialogue that has been established by the OECD is to be welcomed. The initiative can be improved from where it is now, but it is unlikely satisfy all stakeholders completely. Whilst offering constructive criticism we should remain pragmatic and not allow perfect to be the enemy of good.