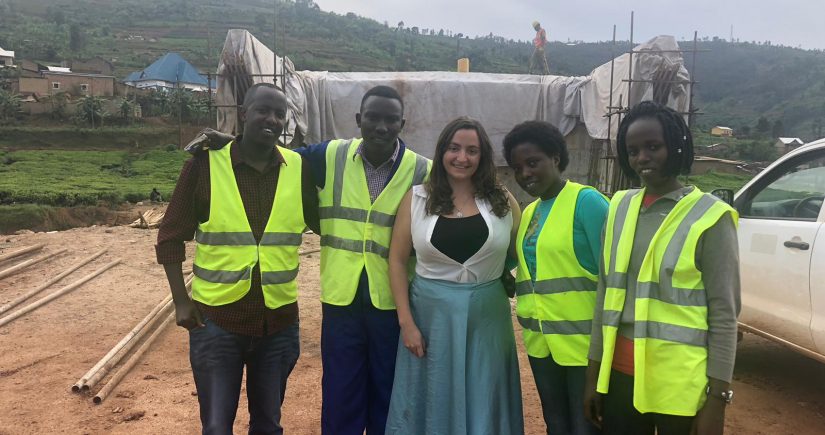 Since 2017, Engineers Against Poverty (EAP) has been supporting the Royal Academy of Engineering (RAEng)’s Africa Catalyst project which promotes the development of engineering in Sub-Saharan Africa (SSA), and thus the economic and social development of the region. In this blog, Elizabeth Dykstra-McCarthy explains the rationale behind the project and focusses on key findings from an evaluation conducted into the project’s Rwanda programme, Bridging The Gap.

Why is it important to support engineering bodies in Sub-Saharan Africa?

Engineering capacity is essential for the economic and social development of any country, as highlighted in a previous report developed by EAP and RAEng on identifying engineering requirements in SSA. As a basic requirement for the sustainable provision of infrastructure, it enables better healthcare, access to education and the development of an attractive environment for foreign investment. It is also a key driver for innovation and growth. In SSA, infrastructure development lags significantly behind other developing regions. This results in road networks that are fragmented at best, major power shortages in over 30 countries, and limited access to services for the region’s largely rural population. The historical view that development can be brought about by external expertise has given way to the realisation that local innovation and capability and contextual understanding must be nurtured and valued so that solutions can be developed in-country.

SSA suffers a chronic lack of indigenous capacity in engineering. Quantitatively, there are insufficient numbers of engineers graduating to meet demand in some countries. The basic problem is a lack of manpower. Yet whilst there are often unfilled posts, there are also notable levels of unemployment among engineering graduates, indicating that the problem is more complex than a simple lack of numbers. Unemployment among engineering graduates may, in part, be due to a reluctance on their part to take poorly paid positions in rural areas, or due to the dominance of foreign engineering firms who import foreign labour. But a major issue remains – often engineers graduate without the necessary skills and experience to be employable. One interviewee from our report with RAEng commented that: “the universities are able to churn out the engineers in numbers… but many of them do not have the skills to be able to operate in a global economy’’.

Bridging the Gap – from graduates to professionals

For the past two years EAP has been supporting the Institute of Engineers Rwanda (IER) on their ‘Bridging the Gap’ programme, which is part of RAEng’s Africa Catalyst. The original phase of the project was designed around a core justification: that for most Rwandan graduate engineers there is a debilitating gap between the theoretical knowledge they were taught at university and the practical skills that future employers need and expect. Whilst graduates possess strong theoretical grounding in engineering, limited opportunities and exposure results in low-skill development. This lack of practical experience can become a hefty barrier to employment. To address this gap, IER chose to focus on raising the practical skill level of graduates.

The project offered the opportunity for 60 graduate engineers to undertake a six-month practical placement. Candidates underwent a rigorous application process; 120 applicants applied to the internship and only 50% were accepted following a series of interviews and tests designed by senior engineers from different professions.

The IER was committed to ensuring interns gained experienced across a wide range of projects which would not otherwise be accessible to them, such as mega-projects, and so placements were located across Rwanda.

Being exposed to mega-projects is invaluable experience for budding engineers: one such project that Bridging the Gap gave interns access to was the largest highway project in Rwanda, which will connect the eastern corridor of Africa from Uganda to Tanzania. Not only were the young graduates exposed to the practical skills they needed, but there was a range of tasks on each project for them to 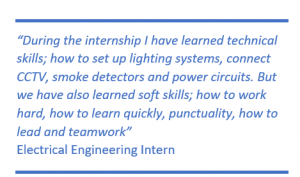 test their skills and preferences on. If they were civil engineers, this could be anything from roads to bridges. For the electrical engineers, this meant being present throughout the duration of the project in order to add finishing touches.

Crucially, this experience also exposed the graduate engineers to professional skills beyond engineering such as costing, local legislation and reporting. Developing soft skills such as leadership, teamwork and project management was also a priority. Focussing on this complete skillset led to an increased sense of employability in interns, 95% of whom said that when they had previously applied for jobs, they felt a lack of experience was their biggest barrier to employment. Whilst it is too soon to measure the outcome of the internship, we hope that six months in the workplace developing technical and professional skills will play a major role in establishing professional self-assurance across the intern pool.

A critical step in this process was the mentorship scheme which linked interns with industry professional who could allocate and provide guidance on their work, and this also saw the development of learning programmes where interns feedback on their progress and challenges. The evaluation picked up on the significance of the scheme, showing that the most succesful interns were those with strong relationships with their mentors.

In 2017, one company hired two of the four interns they had taken on and in 2018,  a mentor at the same organisation indicated that a possible three more could be employed. While it may be too soon to see the full picture in how Bridging the Gap has impacted employment prospects, the signs are positive so far.

In two weeks, I will be going to Kigali to support IER to maximise the benefits from the programme. This will include a mentor training day and developing good practice from past experiences which we can bring to the next phase of the programme.

Importantly, IER will now be concentrating on the sustainability of the programme to ensure long-term impacts. As a starting point, IER is seeking to diversify its funding and support, building partnerships with government bodies such as the Rwandan Development Board which could see government management of the programme and targeting the private sector for funding, should the programme stay in their hands. This could return positive results – it is in the interests of engineering companies to foster a growing force of highly skilled Rwandan engineers. IER is also seeking to ‘bridge gaps’ within the university syllabus itself – through accreditation, how universities prepare courses and enhancing practical elements.

Infrastructure is the cornerstone of development and it is vital not only for the critical pathways it provides to allow citizens to go about their everyday lives, but the actual process of constructing it leads to economic growth, job creation and skills development in the local populations.

Topic guide: maximising the benefits to the poor from infrastructure programmes aimed at increasing growth