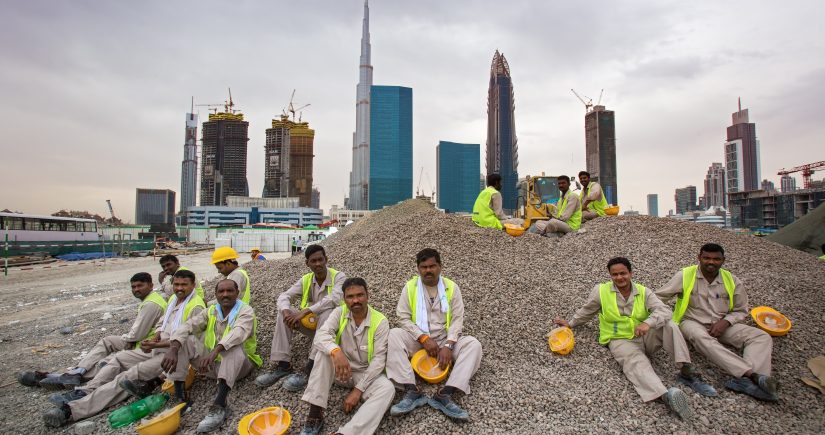 For the past several years Engineers Against Poverty (EAP) has been conducting research into late payment in the construction industry and its serious ramifications resulting in wages being paid late to migrant construction workers. Our recent report focusses on these issues in Gulf Cooperation Council (GCC) countries, yet late payment and wage delay are universal phenomena, so the work is globally relevant. For example, the report shows how GCC countries can adopt and adapt measures and innovations implemented elsewhere and how an innovation developed in the GCC (the Wage Protection System) could have relevance for other countries facing the same problems. In this blog, author of the paper Jill Wells explains the issue further and the role for both governments and clients to address it.

Why are wages paid late? 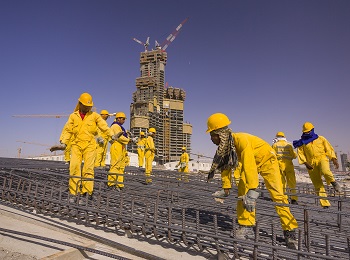 There are several reasons why wages may be paid late but a common factor is the time lag between when the work is done and when payment is received. Construction work is typically funded by the participants who are in effect unsecured creditors waiting for interim payments to flow down from the client.

These lengthy contractual chains from client to main contractor, subcontractors, material and labour suppliers, facilitate payment abuse. Money withheld at the upper reaches of the contractual supply chain causes serious problems for participants further down. Sadly, it is those at the bottom of the chain who suffer the longest delays and are the least able to mitigate their impact. Among this group are many employers of the construction workforce – small companies with limited funds which cannot pay the workers’ wages until they themselves have been paid. A recent survey of contractors in the UAE and Qatar by the Business and Human Rights Resource Centre has revealed that up to 80% of the labour on some projects may be employed by subcontractors or labour supply companies.

A ripple down can also ripple back up and across projects

Late payment by clients and contractors needs to be addressed, not just because of the catastrophic effect of wage delay on construction workers and their families, but it is likely to have repercussions on the project, the industry and the broader economy. When workers have not been paid they will eventually withdraw their labour and suppliers will withhold delivery of materials, causing delay and disruption to the project, so the ripple effects can go both up and down the chain.

Late payment is also a major cause of insolvency in an industry where profit margins are low and credit in limited supply. Subcontractors are especially vulnerable to payment delay as they are often small businesses without financial reserves or substantial assets that provide collateral to allow them to borrow. Liquidation of a subcontractor will impact all projects the company is working on and so the effect can also ripple across multiple projects. Insolvency of contractors or subcontractors will cause significant delay while work is re-tendered, probably at higher price. And what this means for the workers is that they will lose their jobs and are unlikely to ever be paid.

Late payment also means that contractors and subcontractors are in fact providing short term finance for construction projects, which is unlikely to be available on favourable terms. Hence there is a clear impact on cost as well as on time of project delivery. It may also lead to problems in quality as firms that are struggling to maintain their cash flows cut costs, for example by substituting cheaper materials. A more effective payment system, one that allows all participants to be paid on time, should therefore bring benefits, not only to workers and contractors, but also to industry clients.

A role for governments

A consensus has in fact been growing among national lawmakers that payment abuse in the construction industry has reached a point where the damage is so severe that the construction industry can no longer be left to regulate itself. Laws are needed, imposing rules on the abusive elements in the industry. In the past two decades policies have been introduced in countries around the world to regulate payment and promote a fairer system that protects the weaker parties. The policies include:

There is evidence from the USA, EU and UK that legislation to promote prompt payment can be very effective when government is the client. To ensure that funds then flow down the subcontracting chain, UK, New Zealand, Singapore, Malaysia, Ireland and some states in Australia have banned pay when paid clauses in contracts, with the right of contractors and subcontractors to suspend performance when payment is delayed. These same countries have also introduced statutory adjudication which can rapidly resolve payment disputes so the flow of funds is not disrupted. The City of Seoul in the Republic of Korea has successfully introduced a system using a Project Bank Account to increase transparency and fairness in payment procedures and protect workers against late payment. And several EU countries have addressed the problem by developing joint liability schemes whereby principal contractors, and in some cases clients, share responsibility with the immediate employer for ensuring that all workers on their project are paid on time.

These policies are currently being promoted to governments in the Middle East to strengthen and support one important innovation – the Wage Protection System (WPS) – which was pioneered by the UAE in 2009 and has since been copied by the other five members of the GCC. WPS is an electronic salary transfer system requiring that wages be paid directly into the personal bank accounts of workers. It provides workers with the evidence needed to prove when they have not been paid, while also helping relevant authorities to resolve payment disputes.

Despite offering some protection to workers, the WPS is still a reactive solution, rather than a preventative one. In the absence of preventive measures, the number of wage disputes has risen exponentially in the past few years, clogging up the labour courts in some countries. Therefore, if the system was implemented alongside the adoption of the measures proposed above pressure on the courts would be relieved, insolvency in the supply chain reduced and it would ensure that employers have the funds to pay when wages are due.

The key role played by clients

In the absence of government action there is still much that clients can do to ensure prompt payment along the subcontracting chain, so that the problems created by late payment can be averted and their projects can be delivered on time. The policies described above facilitate good practices which are already being followed by some clients in the region. In the GCC several major clients have developed their own worker welfare standards that stress that workers must be paid on time. At least two (in Abu Dhabi and Dubai) have included a ban on pay when paid by stating clearly that payment to workers is not conditional on receipt of payment from any other party.

Clients can go further and make it a condition of tender that all contractors agree to pay their subcontractors according to the schedules set out in their contracts, even if payment from the client is delayed and this can be included in the terms of the contract between the client and the principal contractor, together with a requirement that the principal contractor monitors compliance throughout the supply chain. They can raise the standard in the industry by deciding only to work with contractors with a reputation for prompt payment while also requiring prior approval of all subcontractors, as is the policy of the Supreme Committee for Delivery and Legacy in Qatar.

At the very least, clients should support the uptake of the WPS. As stated in our report, clients could do this by building a requirement into contracts that all workers employed on a project be paid through the banks in accordance with the WPS operating in the country.